The House by the A-frame 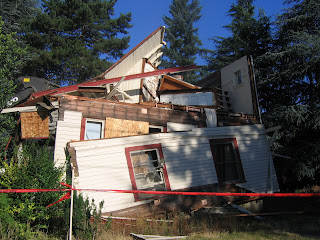 Here's something you don't see every day! We woke up in the morning to the sound of crunching boards and breaking windows. The house by the A-frame was coming down! I stayed in this house one summer during college. It was a neat, old house built in 1921, but unfortunately, it had many problems and had been sitting empty for about a year or so. It was a pile of rubble by the afternoon. Time to make way for something new.
Posted by Melissa at 7:32 PM 3 comments:

On July 17 we celebrated our third anniversary. We went to Ashland and stayed in the Ashland Springs Hotel. It's a beautifully renovated historic hotel built in 1925, and it's the tallest building in Ashland. 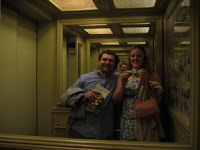 After we checked in, they directed us to the back entrance off the parking lot. We entered a dark hallway of rooms, found the old, creaky elevator and as soon as we stepped inside and the doors closed behind us Davin and I looked at each other and said, "Tower of Terror!" That's exactly how it felt... in a fun way. Although Davin did seem to enjoy jumping to make it shake and freak me out. We enjoyed wandering around and sitting in the lobby. The hotel has an inviting atmosphere that takes you back to the 1920s. We will definitely stay here again next time we're in Ashland.

We also went to see "Taming of the Shew" at the Elizabethan Theatre. It rained during the performance so the stage and all the people on the main level got wet, but thankfully we were in the balcony which was covered. The funniest part was when a dog came out on stage and the actor was telling him to sit. He sort of crouched down. Then he was told to lay down. He looked at the guy and looked at the floor and just crouched there. "I know, my Lord, it is wet," said the actor and the whole audience laughed which startled the dog. It's a great comedy you should see if you get the chance. 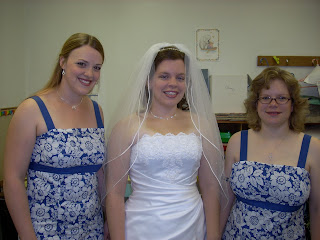 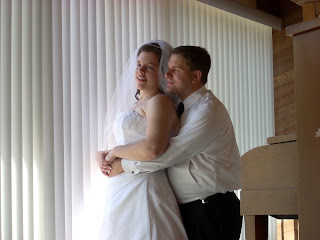 July 7th was a popular day for weddings! Davin and I ended up parting ways for the day to attend two different weddings. I was one of the Matrons of Honor and also sang in Beth Ptolemy and Paul Bomar's wedding in Seattle. Mom came with me so we enjoyed some girl time together. It was a simple and sweet ceremony that went off without a hitch... except the cake topper fell and the groom's head broke off, but Mom fixed it so no one could even tell. It was a fun weekend, and I'm so happy for my friend, Mrs. Beth Bomar! 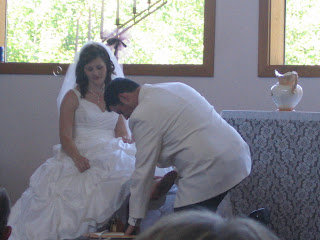 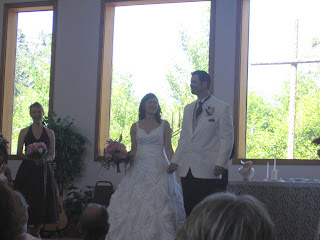 Davin writing now. I went to Tré and Kelly's wedding. It was a really nice wedding. I was great to see Tré get married to a great lady. It was also cool to see Kelly marry a great guy. I think that they will make a wonderful couple and I think God will richly bless their marriage. One funny thing at the reception ... Tré and Kelly were doing their first dance as a married couple and Tré went to dip Kelly and she ended up on the floor ... laughing though so it was all good. Congrats Tré and Kelly Wilbanks (such a proper sounding last name).
Posted by Melissa at 10:30 AM No comments:

So, I've been working on a project for Multnomah for a while called the Media Library. It's a place where we can put all kinds of media in a central location that is easy to find. I finally finished the project (well finished enough ... nothing is ever done) and amazingly people have been checking it out. If you read this blog check it out for yourself. Below is a sample from the site. It is a demo that our Tae Soo Do group did for a Multnomah basketball game.

Posted by Unknown at 2:43 PM No comments: