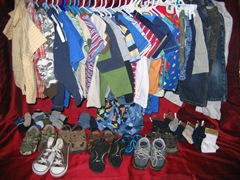 A few weekends ago was the biannual Just Between Friends sale at the Expo Center. Desmond has outgrown all his clothes so he needs a full new wardrobe for summer. I found all sorts of fabulous deals during my 5 hour shopping spree! My limit for shirts was $1, pajama sets $2, pants $2, and shoes $5. I also found a couple nice jackets for $3 each. I got some great brands: Gap, Old Navy, Carter’s, and Disney to name a few. My best deal was two pair of Stride Rite shoes normally $45 each, but I got them for $5 each! I spent $95 for everything but also made about $50 in sales, so everything you see in the picture really only cost me $45. Whoohoo!!! Mark your calendars for the last weekend in September and you too can get in on the action!

So much has been happening lately!  This is a long post to catch us up to speed.

I enjoy pulling out the camera to capture everyday moments.  I’m afraid I’m going to forget the little things.  Here are some random shots: Desmond playing with the mobile in his crib (he wants to play with it after every nap), sleeping pics, playing on the floor, and generally just being a crack up.  He’s started pulling silly faces every time I get out the camera.  Too funny!

Des has 6 teeth now.  They all showed up within a week of each other.  Gotta watch out for biting now!

Desmond’s getting closer to crawling.  He rolls around a lot and gets onto his knees sometimes.  The other day he got stuck on his feet with his face on the ground (if you can picture that. I couldn’t get the camera fast enough).  He can turn all the way around in a circle on his tummy, and when we hold his hands he loves to stand up.

Naps are getting interesting.  He wiggles and moves so much he ends up upside down at the other end of the crib and he also likes to reach through the slats and bang on the wall.  I’m thinking the nap he’s trying to take right now isn’t going to happen, but at least he’s not crying… yet.

Yesterday I finally took Desmond to the doctor.  He hasn’t felt well for the last week.  He’s had a fever off and on with the highest being 102.  He woke up with a hoarse voice on Sunday so now his cries sound so pitiful, and the worst part is that he’s not sleeping well at night.  Sometimes he’s up crying for a few hours at a time.  Well, the doc said he’s got a bad sore throat and an ear infection.  He’s on antibiotics now so hopefully that will kick it soon.  (By the way, our big boy now weighs 25lbs 9.5oz!)

I’ve been missing lots of Baby Boot Camp due to baby issues so last week I decided to run on my own.  I put Des in the stroller and jogged around our large 2.5 mile block.  The second time I did it without stopping which made me feel really good!  However, my shin splints were telling me I did too much too fast. Guess I’ll have to back it off a little.  I’ve been down to my pre-pregnancy weight for awhile, but I haven’t been able to budge the scale for awhile.  I’ve still got 30 unwanted pounds to ditch.

We spent Easter in Albany with my family since April 12th was also Jeremy’s 19th birthday.  Of course Desmond seems to steal the show wherever we go.  His Nana had lots of fun showing him off to all her friends at church. 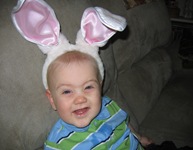 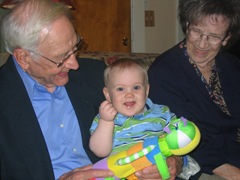 Desmond in bunny ears and sitting with Great Grandpa and Great Grammy.