As you may remember, we had a laundry room flood in the middle of the night six months ago when a washing machine hose burst.  We called in the big guns and they dried us out, replaced the whole downstairs floor and a month later we were back in business.   The nearly $15k job was covered by insurance except for our $2k deductible.  We never want to do that again so we got the braided, auto shutoff hoses that are guaranteed to not burst.

Fast forward to last Monday.  I unknowingly did a load of wash with the drainage hose out of the drain!  It got loose and fell out so all the water drained onto our new laundry room floor and seeped into the carpet and walls of our family room and into the crawlspace.  NOT AGAIN!  We called the mitigation company back and they came to assess the damage which wasn't nearly as bad this time.  They quoted us a price around $2k for dry out and re-installation.  We had to do the tear out ourselves to get this price which took us over ten hours.  We didn't want to go through insurance for something "minor" because it would raise our insurance premium by $500 per year from now until forever.  Still this "minor" repair cost is really going to set us back.  At least we're getting some home repair experience.

Last night I started taxes and can see that we're going to get a pretty nice return this year.  Whew!  We're going to be fine.

Now for today.  The half bath toilet overflowed, and though we got to it quickly, water still seeped through the wall and over into the laundry room sub floor that just finished drying out Thursday.  Can you hear us?  NOOOOOOOO!  At least we have that tax return coming.  This time I feel like we know exactly what to do.  We're buying a moisture reader like the mitigation guys have (except the one I just bought didn't work so Davin's out exchanging it) and rented some carpet fans from the hardware store.  We've seen this done before.  We're just hoping we don't have to rip up the laminate floor in the bathroom which would require removing the pedestal sink and toilet.  At least the new laundry room floor isn't installed yet so no tear out required there.  Just re-dry it!  I'd best go change out of my Sunday clothes and start tearing off the baseboards so we can assess the damage.
Posted by Unknown at 11:13 AM 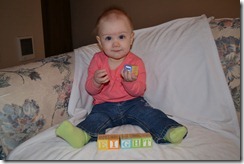 Kaylynn is eight months old now.  My how time flies!  She’s starting to do the hands and knees rocking motion so maybe she’ll advance beyond the army scoot soon.  She’s enjoying more foods and her first top tooth has poked through; the other is not far behind.  Carrots are her favorite veggie and bananas are her favorite fruit.  She is signing “all done” sometimes in addition to “more” which is helpful.  She’s still not sleeping through the night – the little stinker!  We’ve got to train her out of that, but lately that’s been partly due to sickness.

Kaylynn got her first stomach bug after Desmond had it.  It’s the first of many sicknesses the kids are going to pass back and forth now.  For a few days she couldn’t keep anything down.  That wasn’t any fun.  I also decided to ditch the cloth diapers for a few days until the nastiness passed.  The liners couldn’t keep up with that.  Eww!  Currently she’s in disposables again because she got a terrible diaper rash and we have to keep her super dry and covered with ointment.  Desmond never had a bad rash like this, but it’s finally getting better.  Hopefully we’ll be back to the cloth diapers soon.

Speaking of cloth diapers, I didn’t win the contest for free diapers but that’s okay.  I think I’ll still get some more because I’m finding I have to wash them every other day and that’s getting to be a bit too much.  I have to change Kaylynn more frequently in cloth because of the wetness factor and we double them up at night so we go through about ten a day.

Desmond is potty training and it’s going pretty well! Hurray!!! I LOVE having him out of diapers. For a few days there with Kaylynn’s sickness and Desmond’s accidents, I was about beside myself with cleaning up bodily fluids!  Thankfully we’ve made it to the other side of that mess.  With all Kaylynn’s extra diaper rash treatment baths, Desmond has been enjoying “crashing her bath parties.”  He also got to run around in our snow flurries this morning, though it’s too wet to stick. 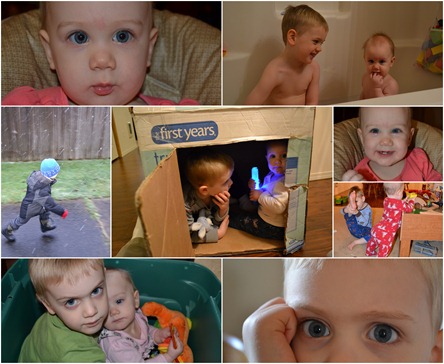 I just love my beautiful kiddos! They play well together and you can tell they both adore each other.  Desmond is to the point where he begs me to not take any more pictures of him, but I can’t resist!