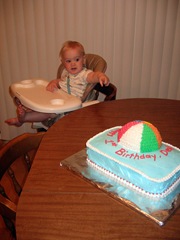 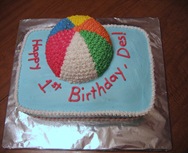 I decided to make a beach ball cake for Desmond since he LOVES his beach ball… or any ball for that matter.  When he woke up the day of the party he pointed to the cake and said, “Ball!”  Yay, he likes it!  His party was themed around beach balls including the plates and favors for the younger guests. 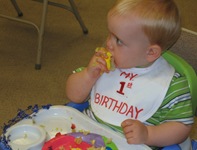 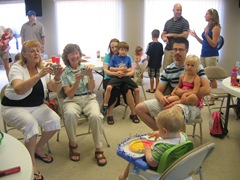 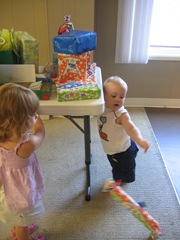 He received lots of presents although he didn’t really know what to do with them.  The older kids were more excited than he was, but he’s loving playing and using all his new things at home.

Wow! That cake turned out really well! What sort of frosting do you use? Homemade? Store-bought? Oh, and Happy Birthday, Desmond! :)

I make a homemade recipe from my mom who I think got it from her mom. It's great for decorating with because it stiffens up a bit.