Desmond is learning to toddle around.  He still has to hang on to stuff, but he’s definitely cruising and using anything and everything he can to stand up.  And he’s learning fast!  Earlier this week I felt like all I did was chase him around trying to keep him out of stuff he never got into before.  Wednesday I found that he could climb up all the stairs, so in addition to our top of the stairs gate, we now have one at the bottom.  Thursday he knocked his face into the leg of the kitchen table, and it immediately turned purple and started to swell.  Thankfully he let me put his cold pack on it for awhile so it didn’t get too ugly, though he still has the bruise.

Today he was standing with the help of a dining room chair and he fell pulling it down on top of himself.  As I was holding him I noticed blood.  His tooth cut the inside of his now swollen lip.  We got everything under control by having him suck on frozen blueberries and feeding him some smoothie.  The nice thing was he went down for a nap pretty easily after all that.  I wonder what will happen tomorrow?  I hope I can keep up with my little man. 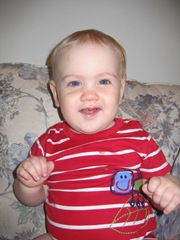 You should see the other guy!

I totally understand! Luke had gotten so many bumps and bruises this past year! I feel so bad for him, but I have absolutely no control over most of them. I guess that's the downside to being a toddler! :)

He gets this from his dad, sorry. :D