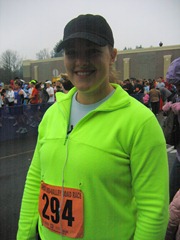 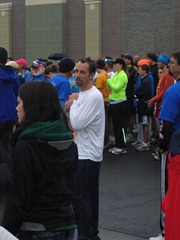 On Thanksgiving morning I ran the Oregon Mid-Valley Road Race, my first race ever.  I have never been a runner; it takes too much effort, but I’m actually starting to like it.  Just after the one mile mark a photographer was taking pictures and here I am!

I signed up for the 5.2 mile scenic challenge.  Interpret “scenic” to mean “hills.”  There was one stretch of “significant elevation gain” about 2 miles in.  Most of the runners around me turned left and ran back for the second half of the flat 3.75 mile run, and I turned right up the switchback road.  I managed to keep my jogging cadence up rather than relaxing into a walk, but near the end of the killer hill a guy who was walking caught up to me and we were going the same speed.  Oh, brother!  I’m a sloooow hill runner.  He motivated me to keep going.

Near the 4 mile marker I was tired and wet. (It rained the whole time.)  A few ladies passed me and I tried to keep up with them since one of my goals was to not be last.  Another goal was to finish in less than an hour.  As I rounded the final corner and crossed the finish line I saw my time: 59 minutes.  Alright!  I also heard the announcer call out another runner after me who finished in just over an hour.  Whoohoo! 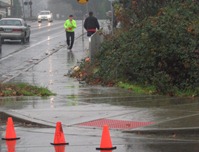 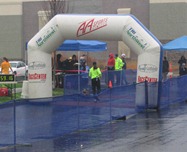 I checked my stats online later in the day and saw that I met two of my goals by one: I was 178 out of 179 runners and my time was an even 59 minutes.  It’s hard for me to do something I know I can’t win or even be anywhere near the best.  I keep reminding myself that about a year ago I couldn’t even run a flat half mile so I’ve improved a lot.  I should be even better next year.  Now I just need to heal my shin splints.  They’ve been bothering me for awhile so I was resting a lot before the race rather than training like I wanted to, but now they’re hurting again.