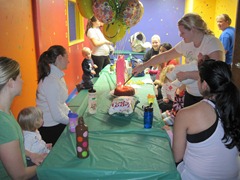 The other day we celebrated Gina’s birthday at Baby Boot Camp.  It also happened to be the first Tuesday class at JJ Jump so that made it extra special.  The kids (and moms) really enjoyed jumping on all the inflatable things.  Desmond’s favorite part was climbing up and sliding down the big slide. 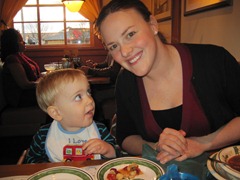 On Valentine’s Day we went out to Olive Garden as a family.  It was fun, but next time we’ll leave Des with a sitter even if it means going on a different day because once he was done eating he wasn’t willing to sit at the table any more, so Davin and I had to finish up pretty quickly.  Still we had fun at our favorite restaurant.  After the little munchkin was in bed, Davin made us some chocolate covered strawberries.  Yummy! 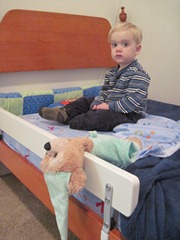 Desmond loves his bear.  He sleeps with it every night along with his blanket.  He doesn’t carry bear by an arm, leg, or the hat, but rather by the neck.  As a result bear has no more stuffing in his neck and has a very floppy head.  Here Des just woke up from his nap and bear was just chillin’ hanging over the safety rail. Desmond was quite distraught yesterday when I gave bear a “bath” in the washing machine.  He’s much more fresh now so it was well worth the momentary separation anxiety. 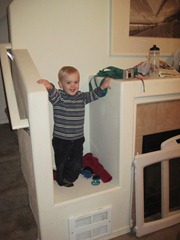 I’m starting to refer to Desmond as my little monkey (or as Desmond says, “money”).  He’s excited to discover he can climb up on all sorts of stuff and reach new things he shouldn’t.  He’s been up on the kitchen table, the counters, this little nook, and even climbed up the slide at the park without any help.  Wow.