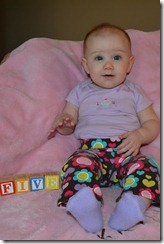 Kaylynn is five months old!  She is starting to scoot herself across the floor just a little, and she is being introduced to the world of solid foods.

She shows a strong preference for drinking her bottle in her room so I have started making her eat downstairs during the day.  When we’re away from home she will hardly eat anything at all.  She’s doing great with solid foods and has had rice cereal, mum mums, green beans, carrots, squash, sweet potatoes, and bananas so far.  It’s fun having her at the dinner table with us. 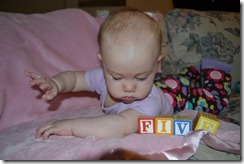 As far as sleep goes, Kaylynn has her own preferences on that as well.  If we’re away from home she usually won’t sleep more than a few minutes and only in the Ergo. Her naps vary from 30 minutes to two hours, but one hour is usually the norm.  She’s very attached to her binky and often fusses at night to have it put back in her mouth when she can’t reach it.  I’m thinking about weaning her off it.  Desmond slept through the night around 6-8 weeks so this not sleeping well for five months thing is new to me.  She still likes to eat once or twice during the night, but I’m trying to make some slight adjustments to her bedtime routine to help signal her to sleep longer.  She slept through last night (until 5 am) so maybe soon…

Kaylynn is jabbering more and more.  I’m hearing more consonants the past week or so.  I often ask Desmond what he thinks she’s saying or say she’s telling him secrets.  When he wants her to talk he says, “Can she make more languages?”  Cute.

Not long ago I couldn’t imagine having another baby.  Now Kaylynn feels so much a part of our life, it’s like she’s always been here.  I love my little sweet pea!