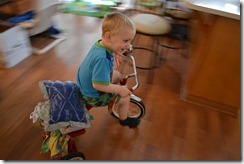 Desmond’s favorite toy right now is his tricycle from Grandma Linda.  He rides laps around the house since we have a good loop through the living room, kitchen, dining and play rooms.  Who knows how many miles he’s put in, but it’s quite a few since it seems like he’s riding most of the day.  I taped some containers on the back so he could hold his cars and toys without them falling off, though now he fills them so full stuff is still falling off.  So there he goes with his big load.  He’s quite good at maneuvering around the corners at a fast clip.  He still occasionally takes a spill, but he doesn’t crash into walls since he lost his tricycle for a day from doing that.  He’ll beg whoever comes over to do laps with him so our company gets exercise, too.  He’s sad he can’t ride now with half the floor ripped up and the other half of the house too full of furniture.