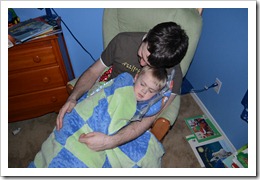 One of the things that I enjoy most of all is reading bedtime stories to Desmond and singing to him while we rock. I’ve done this since he was a little baby. My favorite part was when he would fall asleep while I was singing to him. He’s just so peaceful and cute while he’s sleeping. Occasionally, I think back to when he was really little and I have to realize that he is growing up and that he is changing and some things just won’t happen again. It’s sad to realize that he is growing up and he won’t always be little. 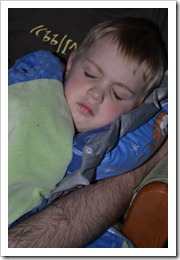 The other night while I was rocking him and singing to him he grabbed his little “Cars” pillow and snuggled up while I sang. It wasn’t long before I could hear his breathing slow and sure enough he had fallen asleep. I sat up there with him for a while and just rocked him and enjoyed that moment because it might not happen again. Eventually, I thumped on the floor and Melissa came up and snapped a couple pictures.