Emberly has started off her eighth month being sick for the first time. On Monday night she woke up twice with the croup. It was pretty bad, but we've experienced this before. The barking cough, crying, and rattling breathing. It sounds awful, but after sitting outside with her for about a half hour or so, it calmed down. Davin held her in the rocking chair while she slept next to the open window for a good chunk of the night. I took her to the doctor in the morning and he gave her some medication to help relax her airway so her cough and breathing could stay loose. She was up coughing again the next night, but at least her breathing didn't sound scary.

The other downside to this sickness is that she's refusing to nurse! I don't know if it's impatience, moodiness from the medication, or difficulty breathing through her very stuffy nose. I've been pumping and giving her bottles more. Over the past few weeks I've noticed her nursing less so my milk has decreased and she's drinking more than I'm making. We'll see how this all shakes out. My back up stash in the freezer is gone after today. I'll pump what I can for now.

Emberly is 20lbs, has two teeth now, is a sitting pro, has the cutest jabbers, usually takes three naps a day and drinks from a sippy cup sometimes. She's still easy-going when she's not sick. More than once Davin or I have commented on her sleeping when she's actually sitting quietly right in the room with us. But every once in a while she'll let out a loud squeal. We'll see how vocal she is as she gets older and has three siblings to compete with.

Back to the cuteness! Emberly is just so adorable and I love her new outfit she finally fits into compliments of Uncle Shane and Aunt Heather. 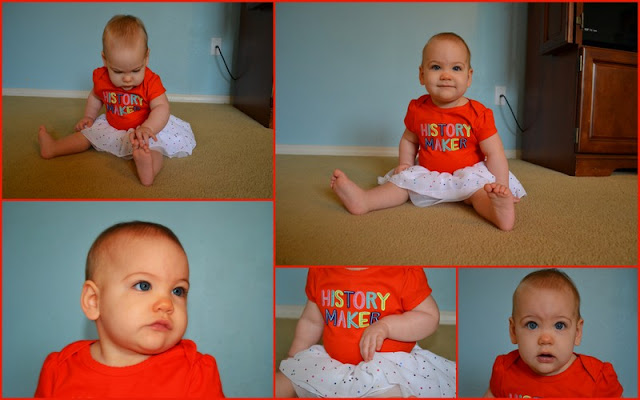 And a little video of the cuteness, too, co-starring Brielle.